* With apologies to Karen Carpenter!

I know I’m not supposed to “relive” events.  I have done that too often with my Cushing’s and cancer adventures and I’m told that reliving causes nearly as much stress as the original event.

So, I plan to write down my memories here and try to let them go…

It all started on Sunday, January 27, 2013 – our 40th wedding anniversary.  I picked up my mom and went to church so I could sing in the choir.  DH went to a meeting of some sort on Benghazi.

After church, I stopped off in the church office for a goodie bag that the Staff Parish Committee had left.

Dropped my mom off at her house and went home.  I put the goodie bag on the dining room table and logged on to the computer to do some work.  I got a couple text messages from DH: 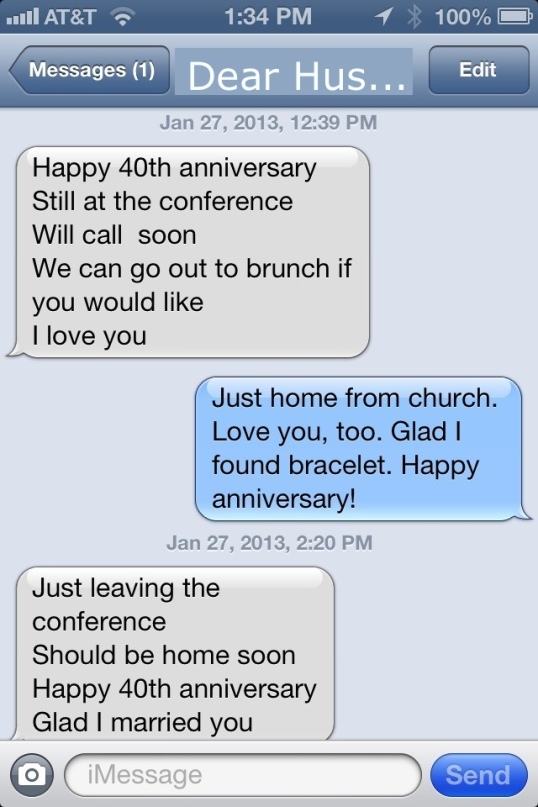 I figured I’d take a nap until DH came home for that late brunch.

The next thing I hear was my phone ringing, a call from DH.  He was in the ER at Fair Oaks with a heart attack.  OMG!

I immediately leapt up and rushed out the door.  I called one of my pastors and got to the ER in record time.   When I arrived, he was in a bed, all hooked up to monitors, fluids and such.  He was awake and feeling pretty well thanks to the nitroglycerine they had given him immediately after arrival.

When we had a chance to talk, it turned out that he had been in his conference and realized his chest was getting tight.  He found the hotel’s store and bought aspirin – 3 for $11.00 which he thought was extravagant.  He bought them and took them anyway – and probably saved his life.  On the way home, he was feeling pretty good so he stopped at the mall to buy an anniversary gift.  The salesgirl in Zales didn’t know that ruby was the stone for the 40th anniversary and was kind of ribbing DH for waiting until the last minute to buy a gift.  He walked out of there, felt more tightness and headed to the ER…where he called me.

DH was feeling pretty well thanks to the nitroglycerine and aspirin plus whatever else they had in the IV and wanted to go home.  The staff said no way – he had to stay overnight so he could be monitored.

The “automatic clock” on the wall said it was Monday.  Other rooms said Sunday.  Hmmm

A trainee EMT came in to ask some questions as part of his learning process.  Every time DH mentioned to word “Benghazi”, his blood pressure spiked about 40 points or so.  That term became verboten ever after.

My pastor stopped by and we had some nice chats and prayers.

Time passed, tests were done, doctors and nurses stopped by.  Finally, DH was moved to his room upstairs.

About 9 or so I went home and found our dog huddled by the front door – I had left so quickly I hadn’t left her any lights on.  I imagine she was quite worried.

I can’t even remember what I had to eat for dinner but I really wanted something chocolate.  On a whim, I looked in that goodie bag and there was a double-sized brownie.  I think I ate that in record time and it really hit the spot.

Monday morning (for real!), I checked the weather and found that school was starting late because of icy conditions.  I put on boots and took the dog out.  It seemed to be raining – if it’s raining, it must be warm, right?  So I didn’t really pay attention (and I had other things on my mind!) and completely missed seeing the black ice.  Next thing I knew, I had fallen on one knee, my cellphone in my pocket bruised my other thigh and my left arm hurt where I’d reached out to catch myself.  Luckily, I hadn’t let go of the dog’s leash.

I ended up sitting in a puddle of icy water for a long time, figuring out how to get up.  I finally sort of crawled up the trash can that was sitting in the driveway.

The dog had an abbreviated walk, I changed my wet, cold clothes and headed to the hospital.  I was showing DH my knee and one of the staff bandaged it up for me.  I told him I hadn’t fallen at the hospital and wouldn’t sue but I guess he wanted to be sure.

(Today, Monday February 18, my knee still has a huge lump under the skin and hurts when I touch it, although I’m no longer limping,  The bruise/pain from cellphone finally went away)

The hospital staff decided DH should go to another hospital which is world renowned for its work with heart cases to have a heart catheterization and possible stent.  DH was ready to walk out to my car to drive him to Fairfax Hospital.  He wasn’t thrilled when he was strapped to a gurney and out to an ambulance instead.

I headed over in my car.  They’d changed the entrances to the hospital since the last time I was there and I couldn’t find the “Grey Entrance”.  Finally, after wandering around for a long time, I found it.

I saw DH in the prep room where they got him ready for the heart catheterization – then they rolled him away after explaining all the things that could go wrong.

I went out to the waiting room, got some coffee and a sandwich and hunkered down with my iPad.

Eventually, my beeper went off and I was called back to the room where DH had been prepped.  The surgeon was there this time.  She said that 3 arteries were nearly 100% blocked and they needed to do emergency triple bypass.  They also needed me to convince DH of this since he was figuring he could tough it out.

I started crying but she said I had to get myself together and convince him NOW.  I had to put on scrubs and off I went to the OR.  I got there, DH was on the table trying to figure out the odds if he didn’t do this surgery.  All the medical staff said that he had  a very low chance of survival without the operation.  He stil wasn’t sure.  He wasn’t afraid to die.  Tough Guy, Yadda Yadda.

One of the nurses asked me if we had any kids.  I said only one, in NYC.  She said I should call him and get him here ASAP.  She even dialed the number.  I talked to DS at work and he agreed to come right away.  He was pretty scared, too.  He later revealed that he had been crying on the train ride.

I went back to the OR, told DH that DS was coming and that he was going to do the surgery.  I signed the paperwork and sent him to a very scary surgery.

It was about 4:30 by then and I needed to take the dog out again.  They said I could go home – surgery wouldn’t be over until about 8:00PM or so. Got home, took the dog, made sure that there were lights on, and headed back to the hospital.  Another pastor from my church called.  He said he’d be by the waiting room later.

Two friends from the church office texted me to say they were coming over to sit with me in the waiting room.  They got there about 6:30 and we decided food might be a good thing.  We headed out, following a variety of directions and signs and walked for a l-o-n-g time.  My knee was killing me.  We got to the cafeteria and found out that it was closed.  the 24-hour one was elsewhere.  We finally found that, got some food and my cellphone rang.  The surgeon would be coming out soon to talk to me.

We hustled back to the waiting room and the surgeon came out about 8:00 with good news.  Successful surgery!  DH wasn’t awake yet but we could see him about 9:00PM.

The pastor arrived about 8:30, then DS got there about 8:45.  Finally, they said we could see DH although he still was asleep.  My friends left, pastor and DS went in to see him in ICU, sleeping so peacefully with so many lines attached.  The pastor prayed, then left.  DS and I decided to stay to see DH awake.

About an hour later, the ICU tech said they were going to keep him asleep overnight so we went home.

Tuesday, January 29 – DS called the hospital fairly early and found that DH was still a bit agitated so they were keeping him under a bit. I took the dog out and we got ready to head back.

I got a call that he was waking up but agitated.  He kept fighting with the nurses on the day of the week.  He kept saying it was Monday, even though it was Tuesday.  Surprise, surprise.  The calendar on the wall hadn’t been changed.  It still read Monday.  No wonder that’s what he thought!

We stayed all day, though nurses, techs, doctor visits and such.  He was in ICU so was monitored very well.  DH was quite confused and repeated himself a lot.  He wasn’t quite sure what had happened.

Wednesday, January 30.  DH had been moved from ICU into a regular room and we had to follow visiting hours, even though we were family.  We could visit at 11 and had to leave at 1, then back for 6-8.  Actually, this worked out well since I was able to take my first nap since this whole ordeal began.

DH had called DS early in the morning and  said he “needed” his cellphone to make some work calls.  Luckily, DS talked him out of that, saying that he could say some wrong things, given his temporary memory issues.  Thank goodness!  I didn’t want him spending his days talking on the phone.

We got there about 10:45am and they still wouldn’t let us in due to “flu season”.  I’m not sure how we could give him the flu in those 15 minutes before official visiting hours.

I glanced at the whiteboard on the wall where the nurses’ names, doctor’s name and such were written.  Unfortunately, no one had changed this whiteboard since Monday, so that’s what it still said.  <sigh>

We visited – DH got to eat a bit and had started having lines removed.  He thought he might put his shorts on so went into the bathroom to do that.  Unfortunately, he managed to pull the IV out of his hand and bled quite a bit.  The nurse sent him back to bed and said no more of that!

A representative from the group Mended Hearts stopped by with information and a heart-shaped pillow.  They have meetings the first Saturday of the month, so we might go to some of those.

The first pastor dropped by again and we made plans for Friday to pick up DH’s car which was still at the ER.  No one else I know could get it – it’s a standard shift car.

Not much else – visiting, napping, improvements every day.

DS had a headache so I went to the hospital alone.  He was going to come for the nighttime visiting hours.  As it happened, DH came home this day after lots of testing, last minute X-Ray, discharge notes, complaints about the night nurse…

Since it’s no longer Monday, this post is over 🙂

17 responses to “Icy Days and Mondays…*”