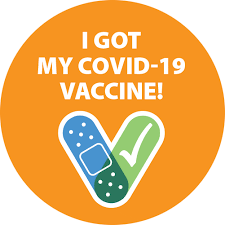 So I decided to write about my DH’s experiences with the COVID-19 vaccine.  Quick takeaway:  He has had a couple TIAs, a “roto-rooter” surgery on each carotid artery, heart attack, prostate cancer…

He had been waffling back and forth about even getting the vaccine.  Finally, a young woman from church signed him up, so he decided to follow through.  She is signing up all the eligible people she knows from our church.

He had the Pfizer vaccine on Saturday, February 27, 2021 at a different location than mine – I was actually surprised how much more efficient mine was than his.  I had assumed that they would be about the same.

When I got to CVS, I found that everything was very well run.

I got a text from CVS asking me to click a link when I arrived at 3:30 and it gave me directions on where to go.

There were 4 people ahead of me that I could see.  It went very fast.  I was in the little room within less than 10 minutes.

The nurse asked if left arm was ok to use.

She told me to treat the little quarantine form like gold.  Take a picture on my phone, just in case.  Maybe laminate after second shot.  Keep it with passport.

She said that old folks (like me!) didn’t have as many issues after second shot.

The shot was very fast – I never felt it.

The nurse said if I get a headache, take Tylenol only.  I said that was all I could take anyway because I have only one kidney.

I sat in the waiting area for 15 minutes to be sure there were no problems  There were about 10 or so people sitting around the store that I could see at various stages of their 15 minutes.

We arrived for DH’s shot about 5 minutes early – There was no indication outside the store, or on any of the doors, that even said that this place offered injections.  When we got inside, nothing.  We guessed that it would be at the pharmacy, in the back.  Next to the pharmacy was a Quest, like Quest Diagnostics, I thought.  DH went in there and was told to check in at the pharmacy.  He waited behind people filling prescriptions and asking questions about them.  Finally, they took his check-in form and they gave him a ticket for the shot.  Then, back in the Quest room.

While he was waiting, I talked to a woman who had just gotten her vaccine. She had no idea how long to wait – unlike CVS where all the chairs had attached timers and someone checking on you and telling when you could leave.

When DH came out (he didn’t wait at all!), he didn’t have a second appointment.  The CVS version, I signed up for both before the first injection.  We were walking up the aisle and he’d lost his card already.  We went back to Quest and he found it.  It’s not in a special pocket of his wallet.

As a special treat, we ate out at an old favorite restaurant of ours, where we hadn’t been in nearly a year.  We used to eat there almost every Friday night – and they remembered us!

Later that night he was thinking about it – and got a little headache.  Meanwhile, our young friend secured his second appointment.

Like me, he was fine the next day but the third day (today) fatigue set in.

From my email today:

At PCF, we realize that many of you who have been affected by prostate cancer, or whose loved ones have been affected by prostate cancer, might be wondering if special precautions need to be taken with the coronavirus pandemic unfolding. We have always believed that evidence out of science and research are the best tools for solving patients’ problems, whether that’s cancer or public health emergencies. As such, we will do our best to use science to provide information and a steady hand in this tumultuous situation.

Scientists know that the coronavirus (aka COVID-19 COrona VIrus Disease 2019) can affect your immune system, although we are still learning more. Based on recent data as reported in the journal The Lancet, it appears that the virus hits the immune system early and knocks down the white blood cells that fight infections. This translates to respiratory disease for most patients who become sick with COVID-19.

The most important thing to remember, whether you have been affected by prostate cancer or not, is that if you are having symptoms as described here, such as a fever (99.1°F [37.3°C] or higher), persistent cough, or shortness of breath, you need to call your doctor.

If you are not having symptoms, it is important that you follow the guidelines to stay safe and avoid spreading the disease. It is critical that all citizens, not just those with prostate cancer, adhere to CDC and local public health guidelines (here’s an example of one source of local guidelines from the County of Los Angeles). You can view the full, trusted list of prevention tactics here, but our top three are: 1) wash your hands for 20 seconds with soap, especially after blowing your nose and before eating, 2) stay 6 feet away from people if you are out in public, and 3) keep your hands away from your face, where the virus can readily enter through your eyes, nose, and mouth.

That said, here are a few extra details for those of you in the prostate cancer journey:

At PCF we are tracking any real-time data on COVID-19 in cancer patients that’s credible and peer-reviewed. PCF.org/COVID-19 lists a number of resources for patients and families, including the ones mentioned here. We will continue to update this page as more information becomes available.

With kind regards for the health of you and your family,
Jonathan W. Simons, MD
President and CEO
Prostate Cancer Foundation

How should a man decide whether to have a PSA test? In the UK, routine testing isn’t offered, but men over 50 years old can request the test from their GP. Digital decision aids abound, but do they help men to reach a decision compared with usual care (discussing the pros and cons with a doctor)?

PSA is an imperfect test, and no amount of shared decision making can get round that.

Observed annually on the first Sunday in June, National Cancer Survivor’s Day has been set aside to “demonstrate that life after a cancer diagnosis can be a reality.”

Each year on National Cancer Survivor’s Day, events and celebrations are held and hosted around the United States by local communities, hospitals and support groups honoring cancer survivors.  Events may include parades, carnivals, art exhibits, contests and testimonies. President George W. Bush and the National Cancer Institute director each included a commencement at the 2008 celebration.

So today is my day and my mom’s day and countless other people’s day.  I’m a kidney cancer survivor – 13 years now!

My DH survived melanoma and is working hard at surviving prostate cancer.

It hasn’t been all good though.  There have been many more in my extended family who did not survive, including my dad and my aunt.

Congratulations to the survivors on this special “Who Knew” holiday, National Cancer Survivor’s Day

Some of the 165,000 U.S. men who are estimated to receive a new diagnosis of prostate cancer this year will develop resistance to hormonal therapies for the disease, but a new study by a doctor now at Northwestern Memorial Hospital points to use of an existing drug to help treat them.This kind of aggressive cancer has challenged doctors, as effective treatment to improve outcomes for these men hadn’t existed previously.

But a clinical trial led by Dr. Maha Hussain, now an oncologist at Northwestern Memorial, showed that taking a drug, enzalutamide, resulted in a 71 percent lower risk of cancer spread or death, compared to those taking a placebo during the three-year trial. The patients involved all had prostate cancer that hadn’t spread but that also had not responded to hormone treatment.

When William Marshall was first diagnosed with prostate cancer in 2016 he said he was concerned about how traditional treatments could impact his life. He said he went to a support group and saw people wearing diapers and colonoscopy bags and worried he wouldn’t be able to do many of the things he enjoys like hiking, hunting, and fishing.

Then he saw a commercial about a new treatment the Cancer Center was offering.

The treatment is called SpaceOAR which is essentially a gel that is put between the prostate and rectum that separates the organs. Its designed for patients who use radiation to treat their prostate cancer. By separating the organs, the gel helps reduce the amount of radiation to organs surrounding the prostate. The gel is temporary and will only stay in the body for about three months before it dissolves.

Dr. Thomas Sroka, a radiation oncologist with the Cancer Center, said inserting the gel is a minimally invasive procedure that can reduce long-term side effects like chronic pain, irritation, diarrhea, and bleeding.

“Radiation treatments are already effective at curing prostate cancer, but this is really something now that is focused on just improving the patients quality of life during treatment and after treatment,” Sroka said.

Sroka said patients getting the treatment done are often able to avoid the negative side effects.

Marshall said the treatment changed his life and helped him manage his cancer.

“I’ve been able to do exactly what I have my whole life without any second thoughts about that cancer that I have that I now believe is gone,” Marshall said.

Marshall said now he wants to make sure other people dealing with similar circumstances know the treatment is an option.

Currently, Sroka is the only doctor in Oregon who can perform the procedure. However, he said Medicare has now recognized the treatment and he expects more doctors to become certified.